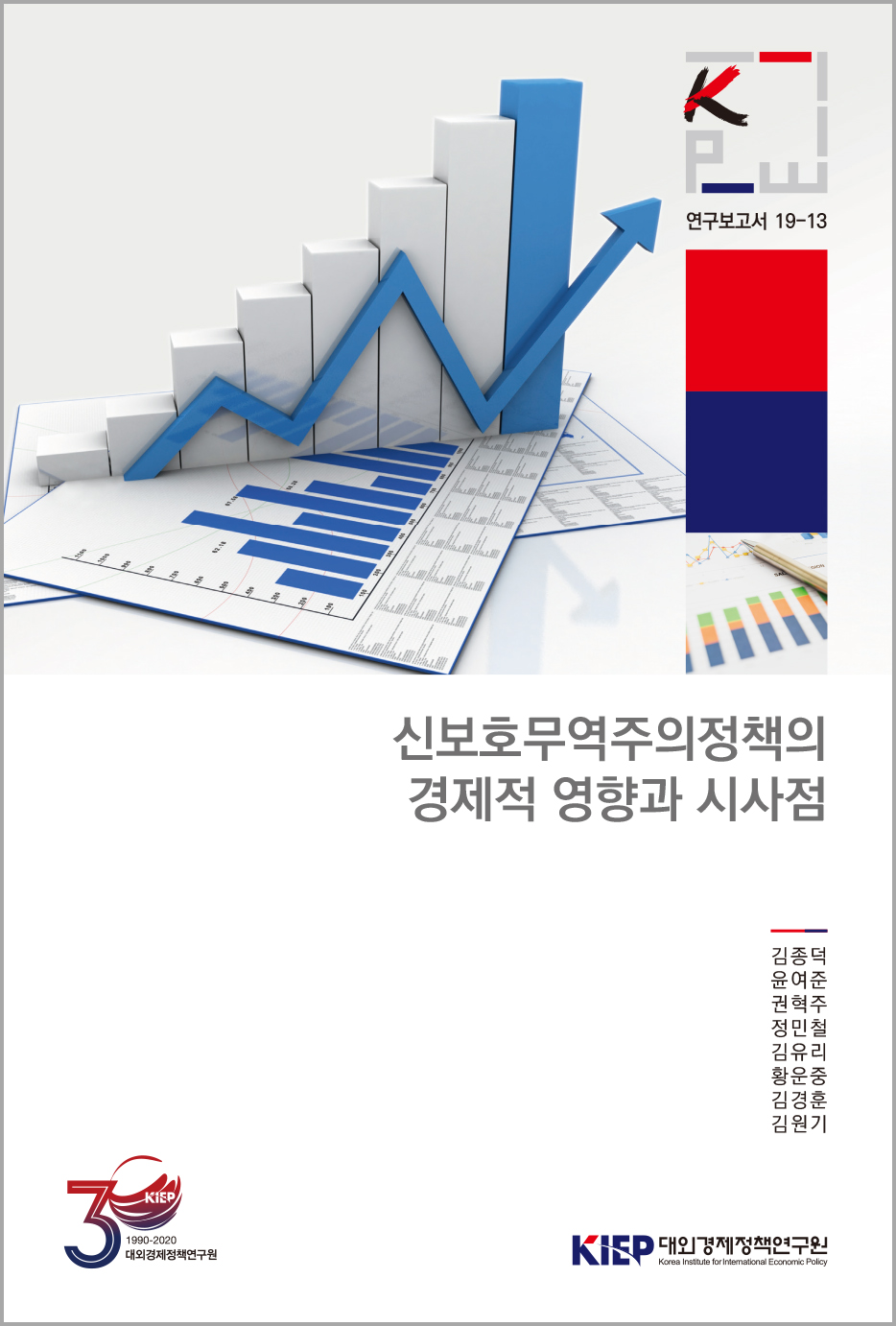 In this report, we tried to examine the economic impacts of protectionist policies from micro- and macro-economic perspectives and to draw policy implications. Instead of analyzing a narrowly- defined single policy of protectionism and its economic consequences, this report opts to compile five rather loosely-bound analyses under the theme of protectionism. The following is a summary of the main findings of the report.
Chapter 2 uses the Caliendo and Parro (2015) model to analyze the short-run impacts of US protectionism on the global and Korean economy. The analysis includes the impacts of Section 232 steel tariffs and Section 301 tariffs, as well as the subsequent retaliatory tariffs. The results regarding US Section 301 tariffs and China’s retaliatory tariffs document how China was the party to experience the largest decrease in welfare. Most of China’s welfare reductions were due to deterioration in terms of trade. The United States, on the other hand, enjoyed an increase in welfare. Korea is experiencing a small increase in welfare. This suggests that, at least in the short-run, the US-China trade conflict is not inflicting significant damage on the Korean economy as a whole.
Chapter 3 aims to quantify the effects of non-tariff measures (NTMs) on both exports and employment in the Korean manufacturing industry. To do this, we employ product-level export data that includes information about whether a product is affected by non-tariff measures. The main results can be summarized as follows: NTMs (SPS/TBT) generally lead to a decrease in Korea’s exports and, as a result, negatively affect domestic employment. Also, the negative impacts of NTMs on employment via export channels were found to be mitigated as the capital intensity of the industry increased. Given the rapid increase in capital intensity due to technological improvement and innovation in production processes, the negative effects of NTMs on domestic employment are expected to continue to weaken in most industries.
In Chapter 4, among various factors affecting foreign direct investment, antidumping measures were empirically examined to understand their relation with protectionist policies. This chapter consists of three analyses using three different datasets: OECD members and major partner economies, the United States as a reporting country (antidumping action country), and Korea as a target country. The analysis yields quite clear results in the first analysis, with many observations and relatively diverse countries. So-called “quid pro quo FDI,” first suggested by Bhagwati (1986), is at work. As for importing countries, the probability of implementing anti-dumping measures is likely to increase when imports from partner countries increase, while it decreases when exports to partner countries increased. This study also finds that there is a significant negative correlation between the inflow of foreign direct investment (IFDI) and the number of anti-dumping charges. In addition, it should be noted that FTAs play a very significant role in mitigating anti-dumping measures. However, since the number of observations is not so large, the analyses for individual countries show less congruous outcomes. In the case of the United States as a reporting country, there is no clear relationship between the inflow of foreign direct investment (IFDI) and the number of anti-dumping charges. Korea’s analysis as a target country shows some anti-dumping mitigation due to the expansion of investment at a low statistical significance. FTAs also seem to be helping to mitigate anti-dumping measures to some extent. Furthermore, the chemical and metal/metal processing sectors are the two main sectors in which Korea has become the target of anti-dumping measures. In the chemical sector, the expansion of investment and FTA relationships with other economies have helped to alleviate anti-dumping charges.
In Chapter 5, we investigate the impact of anti-dumping investigation on Korea’s economy using time-series and panel data. The structural VAR (vector autoregression) result using time-series data shows that Korea’s production, inflation, and export all declined in response to an anti-dumping investigation shock. The interest rate also decreased, and the exchange rate depreciated after the shock and then rose again. Overall, the impact of an anti-dumping investigation plays as a negative demand shock. The panel analysis shows that the impact of an anti-dumping investigation results in a decline in export by 10% on average over the three quarters following the shock. The impact of the anti-dumping investigation shock on exports is inconsistent and considerably different across source countries and sectors. This implies that the effect of expanding protectionism on the economy does not work through just the single channel of lowering export competitiveness. Thus, searching for alternative markets, productivity improvement, and increased incentives for innovation can have a positive effect on exports, depending on the sectors or the corresponding period, even during an era of heightened protectionism. Policy authorities need to respond to protectionism through the formation of strategies tailored to the characteristics of the export industry structure.
Chapter 6 analyzes the effects of global protectionism on macroeconomics in Korea through the dynamic stochastic general equilibrium model and seeks macroeconomic policies as countermeasures against global protectionism. The results of the analysis are as follows. If a trading partner imposes a tariff on imports from Korea, Korea suffers an overall economic downturn. In particular, when counter-parties impose tariffs on Korea, this reduces exports, acting as a kind of (overseas) demand shock. Tariffs reduce Korea's GDP, private consumption, private investment and trade balances and price falls. In response to this economic downturn, expansionary monetary policy (expressed as a more aggressive interest rate cut) could mitigate the economic downturn. In this case, however, the trade deficits (or decrease in surplus) due to an increase in demands for imported goods in Korea could worsen. On the other hand, expansionary government expenditures in response to economic slowdown have the effect of reducing the decrease in GDP, but have resulted in a decline in private consumption and investment. This seems to reflect the crowding-out effects of government spending. In addition, foreign tariffs on Korea have been shown to reduce Korea’s real exchange rate. Devaluation of the real exchange rate can partially offset price competitiveness in overseas markets, but the analysis shows that this effect is not significant.