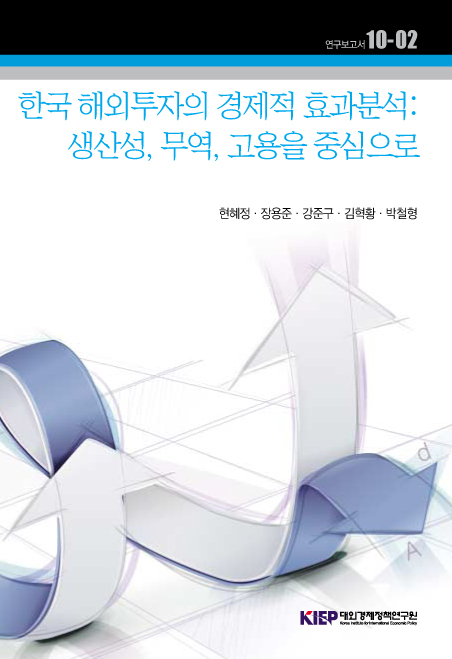 The value of investment by Korean multinationals dramatically rose from less than USD 100 million in 1985 to USD 19.4 billion in 2009, albeit decreasing somewhat in 2009 due to the worldwide economic downturn. Accordingly, the potential domestic impact of the rapid increase in overseas activities by Korean multinational enterprises has been a source of widespread public concern and a hotly debated issue. On one hand, FDI outflows generate fears that such investment displaces domestic employment and capital investment, resulting in reduced productivity－in other words, a hollowing-out effect. On the other hand, alternative perspectives suggest that growth in FDI abroad may increase levels of domestic activity by boosting productivity through offshoring of tasks losing competitiveness at home. Despite the economic and political debates on the effects of outward FDI, it is difficult to find rigorous empirical works of research that explore the performances of Korean multinationals in their overseas activities.
Motivated by this lack of evidence on domestic economic effects of Korean FDI abroad, this report aims to assess the performances of Korea’s outward FDI and draw policy implications. Using industry-level data from the NSO (National Statistical Offices), the effect of FDI by Korean MNEs on domestic productivity, trade and employment are examined. To better understand the mechanism behind the impact of FDI abroad on each economic indicator, we further estimate the size of the impact on production and employment by sector using the Korean Input-Output Table.
The main finding of this report suggests that a 1% increase in FDI abroad can raise industry productivity by 0.004~0.009%. The outflow of investment by Korean multinationals may negatively affect employment in the first year of investment, but this effect dissipates over time. The impact can differ across skill intensities. The employment of unskilled labor can decrease in the short term, but the statistical significance disappears in the long run. As for skilled labor, employment increases in the long run. An empirical study on FDI-trade nexus finds that foreign activities by Korean MNEs can increase both exports and imports. A 1% increase in outward FDI can raise exports by 0.07~0.08% and imports by 0.187~0.192% respectively. An analysis using input-output table further shows that the net effect of FDI on domestic production and employment can be significantly positive because the complementarity between FDI and trade outweighs the crowding out effects of FDI outflows on domestic capital.
The conclusion that can be drawn from the results of this report is that in the short run, outward FDI by Korean firms can lower production and employment through relocation of production sites. In the long run, however, structural adjustment via reduction in low value added work, specialization, and increase in trade volume can jointly contribute to facilitating productivity and expanding demand for skilled labor.
Based on the results, this report may allow firms to gain useful information in establishing strategic objectives regarding FDI outflows on one hand, and suggest important policy variables for policy makers to consider on the other.