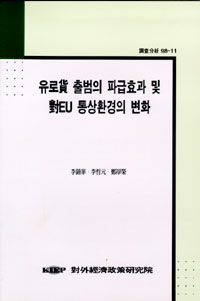 Prospects are for a stable and strong euro. Supporting this view are the sound fundamental economic conditions of the euro countries and strong initial euro demand coming from the integration of European capital markets. Furthermore, European economic recovery beginning last year continues and to expected to last well into 1999. Euro countries in 1999 are expected to realize a current account surplus of USD 200 billion; whereas the US is expected to run a deficit of more than USD 250 Other factors spurring robust euro demand will be the European Central Bank (ECB) billion. placing top priority on price stability. Thus, the ECB is likely to follow the anti-inflationary policy of the German Bundesbank.

Among the euro zone countries, the positive effects stemming from the euro will be summarized as follows. The elimination of transaction costs and hedging costs will increase the amount of internal trade. Price transparency in goods, services, capital, labor markets will increase and accelerate the unification of the markets and this will enhance competition among firms. The euro making pricing comparisons of all products sold inside the euro area instantaneous will boost competition and cause prices to merge at levels likely lower than existed in the pre-euro days.

The euro will increase competition among financial institutions as it pressures the area's financial markets to unify. Assurance of one interest rate and one exchange rate will boost euro-wide financial market activity as both liquidity and merger and acquisition activity increase. In addition to the increased interest of investors within the euro in financial markets, foreign investors are also expected to show higher interest in the euro area market.

The ECB will be in charge of EU-wide monetary policy whereas fiscal policy will remain under each individual member's control. Therefore, in case of symmetrical shocks, such as a fall in oil prices, an EU-wide response is needed to respond to the changed financial conditions and the member countries will normally rely on the ECB's single monetary policy. The recent(3rd December 98) interest rates cut in the euro area adopted to respond to the growing world economic crisis is one such example. However, when asymmetric shocks occur, such as the unification of Germany, and changes are only needed by individual members, then that member alone will implement the needed fiscal measures.One of the largest potential disagreements within the euro area may center around the proper exchange rate of the new currency. The ECB prioritizes price stability above all else. Meanwhile, the currently left-leaning governments dominating major European capitals want to see policies that prioritize job-creation. Based on last month's lowering of interest rates, it seems as though the job-creationists currently have the upper hand as the ECB was coerced into lowering interest rates.
As for exchange rates, again conflict arises between the ECB, which favors a strong euro, and individual governments, which are more concerned with maintaining the competitiveness of exports. However, both the ECB and the individual euro area governments are more concerned with intra euro conditions than with international factors. Thus, the euro exchange rate will not be given a high priority in economic policy making. This 'benign neglect' may lead to high fluctuations between the euro, the dollar and the yen.

Yet another area of conflict between euro authorities and individual member governments is the 'growth and stability pact' which will subject any country with a budget deficit exceeding 3% of GDP to fines. As individual euro members may now only rely on fiscal measures to deal with domestic problems, many euro members find this measure too restrictive. While economic conditions are currently relatively benign in Europe, once recessions hit, the 'growth and stability pact' is highly likely to be a hotly debated topic.

The goal and indeed the likely effect of the euro is stronger European growth and in the long-run, the region's demand for import will likely increase. However, as intra-euro competition increases due to the previously-mentioned factors, thereby boosting the competitiveness of euro firms, the area's exports are also likely to increase, pushing a number of non-euro exporter aside.While in the mid- to long-term, the introduction of the euro will likely boost European growth and thereby korean export opportunities in the region, in the short-term, Korean firms are likely to be challenged by the changes in euro trade structure. Furthermore, as intra-euro area competition heightens, this may further increase the use of anti-dumping measures against korea. Thus, even if the euro proves to be a strong currency relative to the won, in the short-term, the euro area will likely prove to be a difficult market for Korean exporters.

The combined domestic market capitalization of all 15 EU equity markets is currently half of that in the US. However, this gap will surely narrow as the huge European market is largely unified under the euro. Futhermore, a leading factor behind the preference for dollar denominated securities in international trading is the currency's low exchange rate and interest rate volatility.

However, as liquidity and size of the European financial market increase, the euro's interest rate and exchange rate volatility will likewise decrease.As European financial market instruments are to grow more advanced and numerous, the interest of European investors in investment products outside of conventional bank deposits and loans will certainly increase. This increased sophistication of euro investors, compounded by the likely higher economic growth for the area, portends higher foreign direct investment by euro countries. To capitalize on this opportunity, Korean firms and financial institutions should accelerate ongoing reforms and implement a transparent system that will lure the optimal amount of euro investment.

Ultimately, the euro is expected to decrease the international dependency on the dollar as a currency of settlement, especially in Eastern and Western Europe and in Africa. Thus, the Bank of Korea should prepare for the increased euro usage by increasing the share of euros in its foreign reserves. The central bank of China currently keeps 60% of its foreign reserves in dollars and 15% each in deutsche marks and yen. However, China plans to change its foreign reserve holdings to 40-50% in dollars and 30-40% in euros. In addition to public institutions, private financial institutions must also alter the composition of their portfolios based on the future importance of the euro. As the euro is likely to be a strong currency, the tendency is to denominate assets in euros and debt in dollars. According to the German Deutschebank, in the long term, 30-40% of world financial assets will be denominated in euros and the share of euros in the foreign reserves of the world's central banks will amount to 25-30%.

In raising the level of euros in its reserves, Korean public and private entities should give strong consideration to issuing euro denominated bonds as the euro will likely continue to have low interest rates. International organizations, such as the Asian Development Bank(ADB), is considering a large euro exposure and the government of the Philippines is considering issuing USD 50 billion in euro denominated bonds.

While it would be premature to conclude that the euro will soon gain stature in international markets equal to that of the dollar, the euro is off to a strong and promising start. Furthermore, major international financial institutions have implemented or are on the verge of implementing major buy orders for the currency. Korea should not allow itself to be forced into a catch-up policy concentring its euro policy. Instead, Korea must rise to the challenge to realize the benefits the advent of the euro can bring.
서문
요약