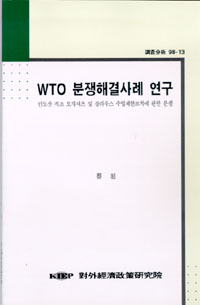 2. Panel Findings
The Panel supported the main claims of India, and made the following principal findings and conclusions:
o On burden of proof, the Panel found that since India was the party that initiated the dispute settlement proceedings, it was for India to put forward factual and legal arguments in order to establish that the US restriction was inconsistent with Article 2 of the ATC and that the US determination was inconsistent with Article 6 of the ATC;
o On the standard of review, the Panel found that its function was limited to making an objective assessment of the facts surrounding the application of the specific restraint by the United States, and of the conformity of such restraint with the relevant WTO agreements;o On the role of the TMB and DSU processes, the Panel concluded that its was required to make an objective assessment as to whether the United Sates respected the conditions of Article 6.2 and 6.3 of the ATC at the time of the determination by the United States;o On the substantive requirements of Article 6 of the ATC, the Panel found that the United States had not met its obligations, since of the eleven economic criteria mentioned in Article 6.3 of the ATC, no information or comment was provided by the United States in respect of productivity, inventories and exports;

3. Claims at the Appeals Stage
Although India agreed with the overall conclusions of the Panel, it appealed certain of its findings of law:
o on burden of proof, India contested the Panel's finding that India had the obligation to establish that the United States had violated Article 6 of the ATC, or that it had the obligation to present a prima facie case to that effect;
o on the relationship between the TMB and the DSU process, India asserted that the Panel's finding on TMB powers denied exporting Members two important procedural rights:the right to hold consultations on a proposed transitional safeguard action on the basis of specific and factual information, and the right to a review of a transitional safeguard action by the TMB.
o on the general powers of the TMB, India asserted that the Panel made statements giving the TMB powers that went far beyond those attributed to it by the ATC.
o on whether the Panel should have made findings on all the issues raised, India argued that the determination on the two issues that the Panel did not make findings on was necessary to resolve the dispute.
The United States disagreed with India's claims, arguing that:
o the Panel correctly required India to meet the burden of going forward with the evidence;
o the Panel's discussion of the TMB and its powers was mere obiter dicta, and that in any case nothing in the text of the ATC supported India's assertion; and
o the Panel did not err by declining to rule on all claims made by India.

4. Appollate Body's Findings
The Appellate Body upheld all the Panel findings under appeal. In particular:
o On burden of proof, it agreed with the Panel that it was for India to present evidence of an argument sufficient to establish a presumption that the transitional safeguard determination by the United States was inconsistent with its obligations under Article 6 of the ATC;
o On the relationship between the TMB and the DSU, the Appellate Body did not consider the comment by the Panel on this issue to be "a legal finding or conclusion" which the Appellate Body" may uphold, modify or reverse"; and
o On the issue of judicial economy, the Appellate Body agreed with the Panel that nothing in Article 11 of the DSU required the panel to examine all legal claims made by the complaining party.

5. Implications
The dispute provides good guidelines for developing relevant logics in the future disputes regarding the legal and economic issues as follows;
First, it is found that the party initiating a dispute settlement proceeding has the burden of putting forward factual and legal arguments in order to establish its case, while the defending party as respondent has the burden of demonstrating that it has complied with the relevant conditions of application of the provisions which it invoked.
Second, in establishing damages, all the relevant variables including those specified in the relevant provisions should be examined in order to provide an accurate picture of the dynamics of the industry concerned. In doing that, the reliability and representativeness of the data is crucial.
Third, in order to justifiably impose a restraint, it is crucial to establish that an increase in imports, not some other factors, is causing serious damage or actual threat thereof in the domestic industry. To prove it, it is strongly desired to make comparison between the current situation and the situation in the absence of the import surge, which may require econometric analysis to forecast future trends in various economic indices.
序言
要約