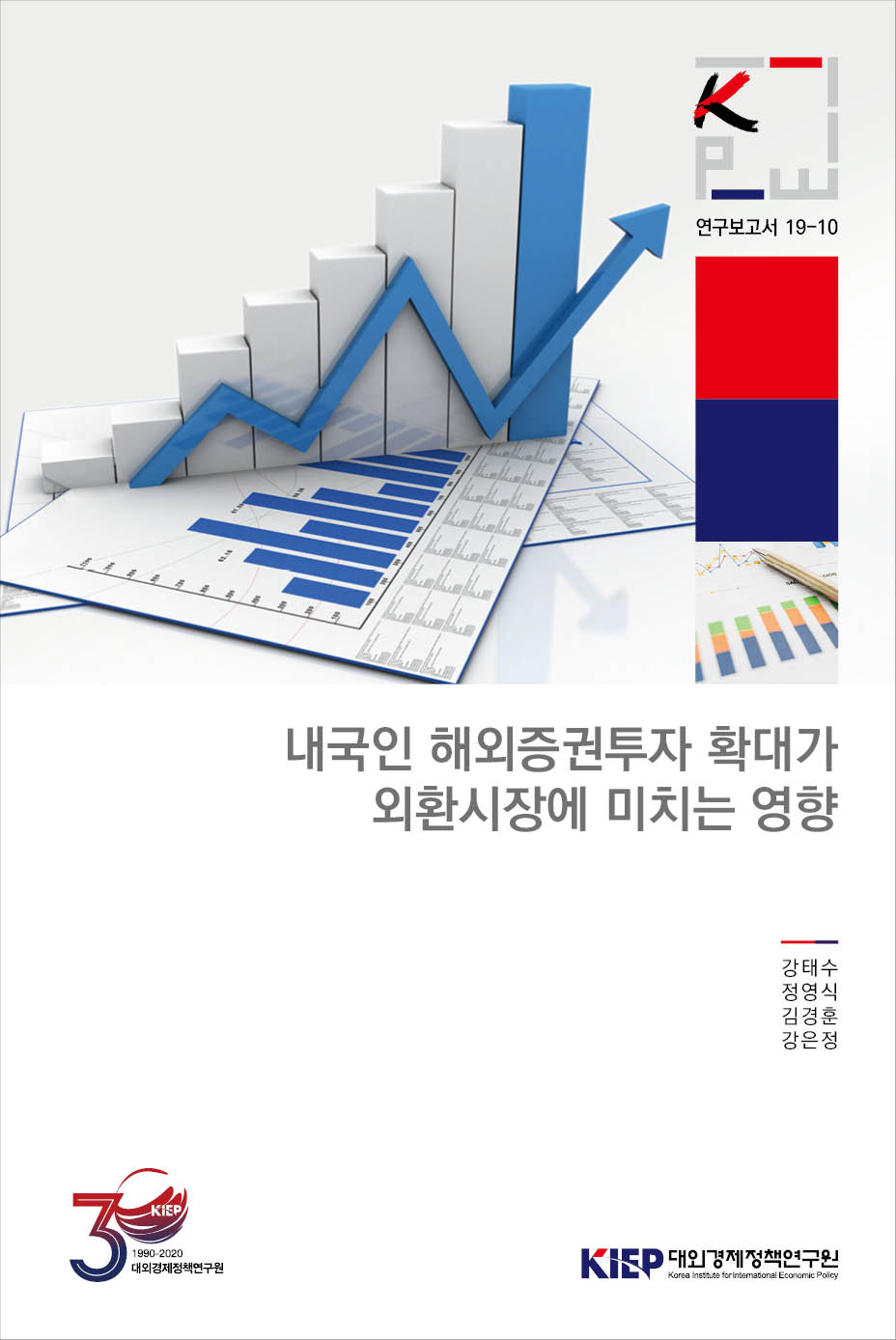 Since 2011, the overseas financial investment of residents in Korea has been increasing rapidly, mainly in stocks and bonds. Residents‘ portfolio investment, which was about 100 billion USD in 2010, has surged to 498 billion USD as of end-March 2019. This trend is expected to continue in the future due to macroeconomic conditions (low interest rates, expansion of savings over retirement), changes in government policies (activation of foreign investment, deregulation related to overseas investment), and institutional changes (introduction of IFRS in the insurance industry). This will have an influence on the Korean financial market through various channels. In particular, it is likely to affect the FX market, FX money market and the external macro-prudential elements such as short term external debt, meaning  it will be necessary to analyze these effects and prepare for risks in advance. Therefore, this study is aimed at presenting policy implications for stabilizing the FX market and FX money market through empirical analysis, comparative analysis of the past and recent expansion period of overseas portfolio investment, and in-depth interviews with financial experts.
In Chapter 2, we examine the impact of the residents' foreign portfolio investments(bonds/equity) on swap rates and exchange rates. We use the Simultaneous Equations Model (SEM), which can effectively mitigate the endogeneity problem under the control of other factors that might affect swap rates and exchange rates. The empirical results of the SEM using the panel data show that the effect of residents’ foreign bond investment and foreign equity investment on swap rates and exchange rates are different. Residents’ foreign bond investment lowers the swap rates, while the residents' foreign equity investment has no impact on the swap rates. On the other hand, the effect on the exchange rates is opposite. The effect of residents’ foreign bond investments on exchange rates are statistically insignificant but, residents’ foreign equity investments are closely related to the depreciation of the Korean won. The notable result is that the effect of residents’ foreign bond investment on swap rates is more pronounced in emerging market economies. These empirical results can be explained by the different hedge practices of foreign bond and equity investment to deal with the exchange risk. In general, residents’ foreign bond investment lowers the swap rate by utilizing the swap market to hedge exchange risk. However, investors in foreign equity investment normally exchange their local currency to foreign currency in the spot exchange market. In this process, the value of the local currency is depreciated. These empirical results are consistent with the results from our VAR model using Korean monthly data.
In Chapter 3, we conduct a comparative analysis between the past and recent periods when residents’ overseas securities investment expanded. This study examines the background, investor, investment method, and impact of overseas portfolio investment expansion in the mid-2000s and from 2010 to the latest. The expansion of overseas portfolio investment in both periods was mainly caused by current account surplus, continued inflow of foreign funds, low interest rate, and government policy to revitalize overseas investment. In other words, as foreign currency liquidity and won-denominated liquidity are abundant due to the current account surplus, the inflow of foreign funds, and the prolonged low interest rate, the seeking for high-yield overseas investments has expanded greatly in Korea. Against this backdrop, the Korean government has promoted overseas investment in order to reduce the abundance of foreign currency liquidity and to ease the pressure on the strong won.
The two periods show differences in terms of investor and FX risk hedge pattern. In the case of the investor, overseas equity investment was expanded mainly by asset management companies in the mid-2000s, while foreign bond investment was largely expanded by insurance companies in recent years. In the case of FX risk hedge pattern, in the mid-2000s, FX risk was fully hedged when investing overseas securities, regardless of stocks and bonds. However in recent years, FX risk is not fully hedged when investing in overseas stocks, while 100% hedged when investing in overseas bonds.
In terms of the impact of overseas securities investments, there are commonalities and differences between the two periods. In the mid-2000s, foreign securities investment failed to alleviate the won's appreciation pressure due to a 100% hedge of FX risks, while causing a drop in swap rates and an increase in short-term external debts. Banks’ short-term external debts, including at branches of foreign banks, have increased thanks to increased opportunities for arbitrage transaction gains due to a drop in swap rates. The increase in short-term foreign debt has contributed to the decline in Korea's national credibility. In recent years, the rate of exchange risk hedging has been lower than in the mid-2000s. However, major overseas investors, especially insurers, still maintain high FX risk hedging rates. As a result, the impact of foreign investment on the exchange rate is limited, but instead, it acts as a factor to lower the swap rate.
Finally, based on the results of empirical analysis, case analysis and in-depth interviews with experts, we suggest the policy implications for stabilizing the FX markets and FX money markets. These include: increased incentives for unhedged foreign currency investments, the need for a governance framework to reconcile differences between macroeconomic and financial regulators, stronger risk responses to changes in accounting standards and capital adequacy regulations, more active foreign currency denominated insurance sales, and improvements made in risk-based capital (RBC) ratio regulation.