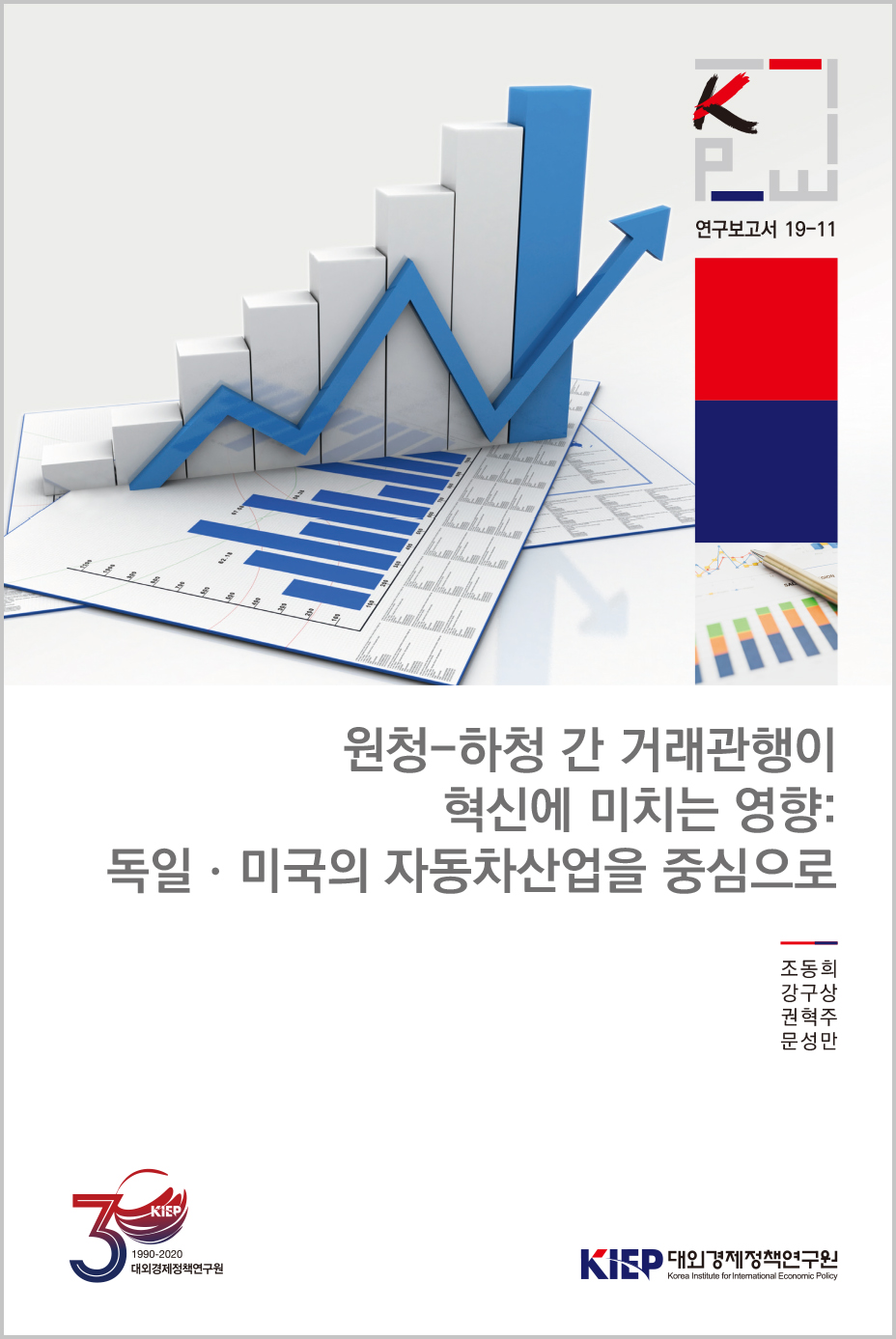 This study analyzes the impact of buyer-supplier relation on supplier’s innovation in the automobile industry. Following previous studies, this study categorizes the buyer-supplier relation into 3 types: market transaction (or one-shot transaction); relational contract (or repeated transaction); and vertical integration. These 3 types differ from one another in such aspects as the level of relation-specific investments by supplier, the distribution of bargaining power and the degree of information sharing and trust. This study first presents a theoretical framework for these 3 types of the relation in Chapter 3, which then serves as a guideline for the case studies and empirical analyses that follow. Chapter 4 looks at the cases of Germany and the U.S., aiming to shed some light on the determinants of the relation type. Chapter 5 estimates the impact of the buyer-supplier relation, especially of the degree of dispersion of supplier’s sales, on the supplier’s innovation outcomes, using the data from Korea and the U.S. Based on these results, Chapter 6 discusses policy implications for the relationship between the Innovative Growth policy and the Fair Economy policy, two of the main economic policies of the Moon Jae-in administration, focusing on the automobile industry.
The main predictions of the theoretical model is as following. First, when the buyer-supplier relation takes the form of market transaction, that is, when the buyer and the supplier play a one-shot game, they are likely to encounter an under-investment problem, in which the supplier does not undertake socially-optimal relation- specific investment. The importance of the relation-specific investment on the buyer worsens this problem, while the transferability of the investment for an alternative buyer reduces it. Secondly, the under-investment problem can be lessened when the relation takes the form of relational contract, that is, when the buyer and the supplier play an infinitely-repeated game. The room for such an improvement increases with the transferability of the investment for an alternative buyer and the importance of the investment for the buyer, but decreases with the investment cost. Finally, vertical integration can also mitigate the problem. That is, ceteris paribus, the problem is less serious when the buyer and the supplier coordinate to maximize their combined profits. Unlike relational contract, there is more room for an improvement by vertical integration when the transferability of the investment is lower.
In the case studies, this study first looks at the current state of the automobile parts industry in the world, focusing on business performance and R&D investment. Germany, Japan and the U.S. are 3 leading countries, while Korea lags far behind them. Interestingly, supplier’s business performance is positively correlated with the degree of dispersion of its sales across regions, which is in line with the theoretical prediction. The 3 best-performing countries also invest the most in R&D. The R&D expenditures of a supplier, both in absolute and relative-relative to physical investment-terms are also positively correlated with its regional dispersion of sales.
The German automobile parts industry not only performs best in business and innovation and invests the most in R&D, but also has the longest history. Innovations are often initiated by suppliers, rather than car makers. The deep trust between buyer and supplier, as well as the latter’s high bargaining power resulted from the successful history of supplier-driven innovations, appear to be main contributors to the success of the German suppliers.
The U.S. has the most top performing suppliers in the world, but its buyer-supplier relation differs from the German case. In particular, the history of the buyer-supplier relation in the U.S. shows all 3 types; and the prevailing type changed from a combination of market transaction and vertical integration to relational contract. At the beginning, the U.S. automobile industry had many small car makers but later became an oligopoly of the Big 3: Ford, GM and Chrysler. Using market transactions and vertical integration at the same time, the Big 3 retained a high bargaining power vis-à-vis suppliers until 1970s. The mass invasion by Japanese cars increased competition in the U.S. market; and, at the same time, innovations in the electronics industry started being adopted in cars. These changes increased the need for innovations, and hence for a smooth flow of information between buyer and supplier, which resulted in a wide acceptance of relational contract.
The empirical analysis of this study finds that the dispersion of sales of a supplier increases its innovation outcome, both in Korea and the U.S. In other words, a supplier innovates more when its sales are more dispersed among more buyers. This finding supports the theoretical prediction that the supplier’s incentive for relation-specific investment, and hence for innovation, increases with the transferability of the investment. This relation is further analyzed, using the additional information available only in the Korean data on the means of payment-cash or credit-and the supplier’s with a buyer, for instance. The results reveal that payment in credit negatively affects the supplier’s innovation outcome. This finding supports the Korean government’s concern on payment in credit in buyer-supplier transactions. The Korean data also shows that the aforementioned impact of sales dispersion on supplier’s innovation outcome is conditioned by such factors as the supplier’s asset size and affiliation.