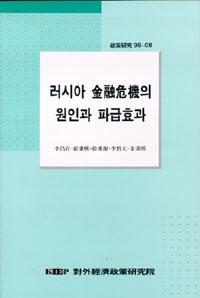 From late 1997, the Asian financial crisis has subjected Russia to recurrent financial market pressures. Such pressures finally became too onerous and on August 17, 1998 the Russian authorities announced emergency measures including de facto devaluation of the ruble and a partial moratorium on Russian debt.

The Asian financial crisis affected the Russian financial crisis in two ways. First, the crisis emphasized the high risks of emerging markets in the eyes of capital investors and thereby helped lead to a massive outflow of capital from Russia. Second, it aggravated Russia's balance of payment situation by lowering world prices of raw materials which constitute most of Russia's exports.

International markets aside, the damage by the August financial crisis on the Russian economy has been enormous. In 1997, Russia recorded its first economic growth since the beginning of economic reform in 1992. However, in September 1998, GDP shrank 9.9 percent and industrial output fell 14.5 percent off September 1997 levels. Still more dramatic were the rise in consumer prices and the devaluation of the ruble. In September, the consumer price index increased 38.4 percent, and the ruble fell from the pre-crisis level of R6.3 to the dollar to over R20 to the dollar on December 8. Furthermore, imposing the moratorium has rendered the Russian government unable to borrow from either domestic or international capital markets. This leaves Russia with no sources of funding other than printing money. However, this option can only further deteriorate the financial credibility of the Russian government both domestically and internationally as well as cause inflation to further soar.

In probing for solutions, no easy fix is apparent. Instead, Russian economic recovery will entail a long and painful process of economic reform where political stability is a sine qua non. With the nomination of Yevgeny Primakov as prime minister, Yeltsin has, at least for the moment, avoided further political turmoil. The Primakov government revealed its anti-crisis program in November 1998. Although it was supported by some politicians in Russia, the lack of details concerning financing have drawn criticism both in Russia and especially from abroad. The most damaging dissent of the Primakov program has come from the International Monetary Fund, which suspended funding to Russia. The short-term outlook of the Russian economy is decidedly gloomy and in 1999 the economy is expected to decline by 5-7 percent.
Unsurprisingly, Korea-Russian economic cooperation has also been negatively affected by the outbreak of the Russian financial crisis. Such impact can already be seen in the fall of bilateral trade between the two countries. Korea's exports to Russia shrank 78.7 percent and 82.5 percent, respectively, in September and October, from a year earlier. This trend of plunging Korean exports to the country is expected to last until Russia recovers from its financial crisis. As Korea-Russian trade represents only about 1 percent of Korea's total trade, it will not have a significant impact on the Korean economy. However, manufacturers of certain food products and electronic goods, the latter of which has been Korea's largest export to Russia, will certainly suffer from the shrinking Russian markets. Furthermore, Korean direct investment in Russia, which had already fallen in before the Russian financial crisis, has further contracted and is unlikely to recover until Russia begins to show signs that it will get its economic house in order.

In order to overcome these difficulties, Korean firms must adapt as quickly as possible to rapidly changing Russian markets. In particular, they must take into account the following factors: Russian consumers' reduced purchasing power, the Russian government's expected restrictive import policy for consumer goods and the collapsed Russian banking system. Therefore, Korean firms must search for new markets in which to diversify and thereby broaden their presence in Russia. For electronics and automobiles, they must continue to expand after service networks and attempt to increase automobile part exports. Meanwhile, the most promising area of Korea-Russian economic relations, where governments can play a constructive role, is science and technology cooperation.
머리말
요약