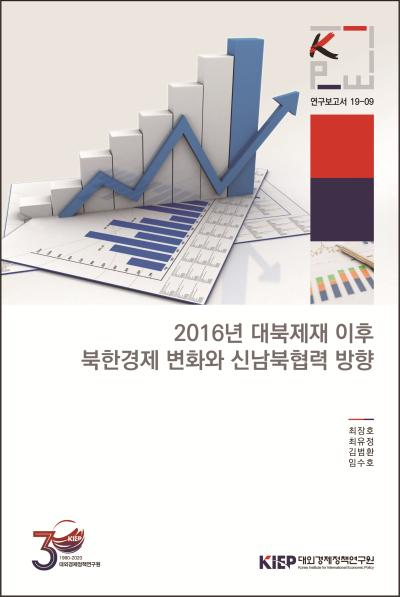 This study identified trends and possibilities in the North Korean economy and seeks new policy alternatives for inter-Korean economic cooperation. First, it analyzed the achievements of new economic policies announced since Kim Jung-un took leadership and the effects these are having within the North Korean economy. In addition, it evaluated the current level of North Korea’s reform and opening up policy based on the experience of various other transition economies.

Chapter 2 examined recent changes in North Korean economic policies and institutions. Chairman Kim has worked to improve the nation’s “resource allocation mechanism” and “priority of resource allocation.” First of all, the “economic management system in our style” strategy was applied to reform the resource allocation mechanism. Second, the government shifted from its previous policy of parallel development of the economy with nuclear weapons to a focus on socialist economic construction to reform resource allocation priorities, reducing the share placed on heavy industries. The government appears to have reduced its investment in the military sector and increased investment in the private sector instead. Third, a total of 27 special economic zones have been designated for external open measures to promote drastic foreign investment. However, these measures have had almost no effect due to economic sanctions. Forth, the government has strongly promoted the import substitution policy, and achieved certain results in the consumer goods and light industrial equipment sectors. This series of measures is thought to be comparable to, or more advanced than, early-stage Chinese reforms, but it is difficult to identify them specifically.

To overcome these limitations, Chapter 3 attempted to quantitatively analyze how the Kim Jung-un regime’s economic policies affected the North Korean economy. Based on the time series data of North Korea’s imports, this chapter examined four parts of the North Korean economy. First, it analyzed the qualitative and quantitative changes in the characteristics of imports shown under Kim Jung-il and Kim Jung-un leadership. There was no structural change in import between the two periods. Second, coming into Kim Jung-un leadership, North Korea’s imports of intermediate goods significantly decreased while its imports of consumer goods increased significantly, mainly from a decrease in investment by South Korea and China due to sanctions, while at the same time North Korea has increasingly produced intermediate goods by itself. Third, our analysis of technology levels of imported goods in North Korea revealed a remarkable growth of “medium-low technology” and “medium-high technology” items due to the influence of Chairman Kim’s policy to promote the science and technology sectors. The policy, however, has been adversely affected due to various sanctions causing a decline in imports of medium-low and medium-high technology items. Fourth, the results of our analysis of North Korea’s imports of intermediate goods in relation to the distribution of firms in North Korea confirm that the economic concentration in Pyongyang has increased since Kim Jung-un leadership.

Chapter 4 conducted a case study of transition economies in order to review the economic reform and opening policy pursued by Kim Jong-un, and how it could be implemented in practice. We examine the policies that countries such as Vietnam and Myanmar have implemented over time since their declaration of economic reform and opening, and assessed under what conditions the policies produced results. Through this, the level of economic reform and opening policy recently pursued by North Korea is comparable to those of these countries, and the policy task to achieve results is presented. In light of Vietnam’s case, North Korea seems to be in a position to move toward a “new economic policy” that emulates the “Doimoi Policy” of Vietnam. Considering the case of Myanmar, the relationship between North Korea and the US seems to be in the early stages of normalization. The key is whether a roadmap for normalizing relations between North Korea and the US can be established, as in the case of Vietnam, and whether North Korea can accept US demand for lifting sanctions, as in the case of Myanmar. Our analysis indicates that the successful outcome of these countries’ opening policies depended on whether they could attract foreign capital. This means that in order for North Korea’s economic reform and opening policy to achieve meaningful results, foreign relations must be normalized first.

Building on these results, Chapter 5 presents the possibility and remaining tasks for economic change in North Korea and the potential cooperation areas to resume and expand inter-Korean economic cooperation under the new inter-Korean economic cooperation conditions. Despite the fact that North Korea’s economy has been showing progress since Kim Jung-un took office, the North Korean economy is undergoing difficulties as the overall economy has transitioned toward a high-cost structure since the sanctions in 2016. Sanctions are limiting the domestic effectiveness of Kim Jung-un’s economic reform policies, and it would be difficult for North Korea’s economy to achieve reform and openness without lifting sanctions and normalizing foreign relations.