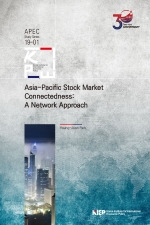 This paper addresses network connectedness in stock returns and volatili-ties across the Asia-Pacific economies over the pre- and post-GFC periods. This study also uses the MSCI-classified group-specific latent factors to ex-amine their connectedness among the developed and emerging markets in different Asia-Pacific regions. We find that (i) based on the return connected-ness measures, global financial hubs - Singapore and Hong Kong - and Aus-tralia play an important role as efficient return information transmitters across stock markets, (ii) the United States is an overwhelming volatility transmitter as a net source of shocks during the global financial crisis, and subsequent volatility spillovers spread the crisis shock to each other in the region, (iii) comparing the results between the pre- and post-GFC periods, Canada was a net volatility transmitter before the GFC but has changed to a net volatility receiver after the GFC, and Korea has magnified the position of a net volatil-ity receiver after the GFC, and (iv) in terms of the degree of total spillovers in returns and volatilities at large, stock market connectedness in the Pacific Rim was reinforced after the GFC. These findings support the potential fea-sibility of financial cooperation and uphold a cause of regionally coordinated macro-financial policies against systemic risk vulnerability.