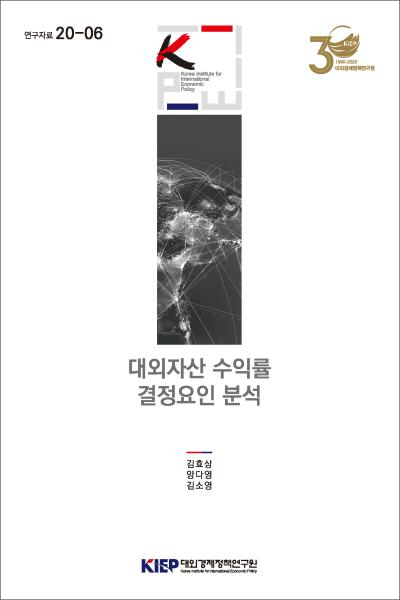 The Determinants of Return on External Assets

As external asset positions increased significantly in both developed and emerging countries due to globalization and financial integration, countries are exposed to capital gains and losses caused by fluctuations in exchange rates and asset values. This study constructs the return rate of external asset position (rate of external) by considering the individual country as the economy’s representative agent. Assuming that the foreign asset position is the optimal investment portfolio, the rate of external defined in this study directly measures the country’s risk premium. The rate of external is also the excess return of the portfolio that takes a long for foreign assets and a short for foreign liabilities.
We observe that advanced economies have a far greater rate of external than emerging countries in general. In comparison, emerging countries have a relatively higher rate of external during crisis periods. Thus, international risk sharing and consumption smoothing mechanism works through external investment. Advanced economies are in a speculator position, while emerging countries are in a hedging position.
We also empirically analyze the determinants of the rate of external. The rate of external is higher as the foreign assets’ size, and the proportion of risky assets increased. There are negative relationships with the domestic currency value, GDP growth rate, inflation rate, and current accounts. The rate of external is higher as the financial market and institutions developed, and the financial market openness increased. However, these effects are offset in the event of financial instability proxied by the VXO index.
Contrary to general expectations, foreign reserves are likely to relate to the return on foreign liabilities rather than foreign assets. The more the foreign reserves, the higher the return on foreign liability. Countries with larger amounts of foreign reserves are more likely to have favorable economic conditions such as trade surplus, higher growth rate, and higher productivity, bringing a higher return rate to foreign investors. These effects, however, disappear in times of financial instability.