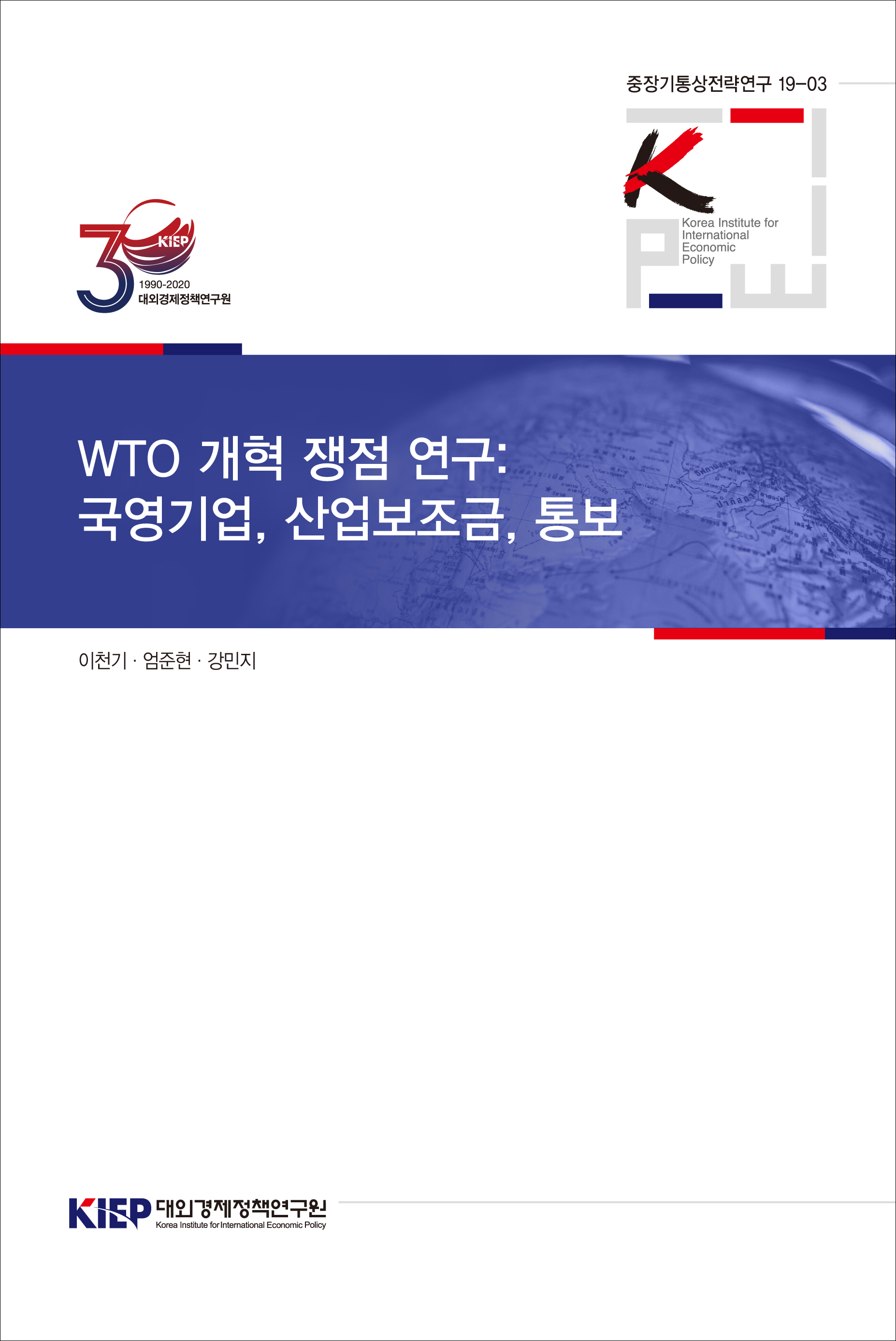 The present study deals with the issue of state-owned enterprises (SOEs), industrial subsidies, and subsidy notifications in the context of “WTO Reform”; examines relevant provisions of WTO agreements in comparison with those under a select number of recent regional trade agreements; and predicts directions for future WTO amendment proposals to be made by the United States, European Union, and Japan (hereinafter referred to as “US-EU-Japan”). Further, in preparation for a situation where these three Members reach out to obtain Korea's support for the amendments, this study seeks to provide policy implications that the Korean government could take into account in defining its strategic positioning in WTO Reform negotiations.
Chapter 2 discusses possible WTO amendments related to industrial subsidization “for” and/or “by” China’s SOEs. To this end the present study firstly sheds light on the current situation with China’s SOEs, its industrial subsidization policy, and possible market distortion arising therefrom. Secondly it discusses practical and normative limits of the current WTO agreements in addressing this trade issue. Article XVII of the GATT has long been criticized for a lack of a definition of “state-trading enterprises (STEs)” and for Members’ insufficient implementation of STEs transparency obligations under the same provision. Further, under the WTO Subsidies Agreement there has been a long-standing disagreement between the United States and China on whether China's SOEs can be viewed as a “public body”, i.e., the granting authorities of subsidies. The United States has consistently objected to the “government authority” and “significant control” standards and criticized that the Appellate Body’s interpretation of the term “public body” would place too much burden on the investigating authorities in proving China’s SOE under investigation constitute a public body. Against this background a few recent RTAs including the CPTPP and the USMCA contain more concrete definition of SOEs based on ownership and control. On a similar note it is probable that US-EU-Japan would propose under WTO agreements to (ⅰ) introduce detailed criteria in determining a public body in cases where SOE subsidization is concerned; (ⅱ) adopt a set of rules which apply to entities which are not public bodies but still under influence of the government; and (ⅲ) add additional obligations and rules which apply specifically to SOE subsidization. For a more detailed analysis, this study examines similarities and differences in relevant provisions of the current WTO Subsidies Agreement, the CPTPP, and the USMCA.
Chapter 3 analyzes a possible WTO Subsidies Agreement revision with respect to industrial subsidies leading to overcapacity or “harmful subsidies.” A future proposal by US-EU-Japan is most likely to provide for (ⅰ) introduction of explicit rules on benefit pass-through, given that GATT/WTO jurisprudence has consistently required a high degree of burden of proof to the investigating authorities in establishing that benefits provided to upstream industries have “passed through” to downstream industries. Additionally the following elements may be proposed: (ⅱ) expansion of boundary of the “prohibited subsidies” beyond export subsidies and import substitution subsidies to include harmful subsidies; (ⅲ) reintroduction of rebuttable presumption of adverse effects (as in now-defunct Article 6.1 of the WTO Subsidies Agreement); (ⅳ) introduction of more detailed rules for out-of-country benchmark for countervailing duty calculation under Article 14 of the same Agreement ; and (ⅴ) adoption of additional fast-track rules specifically for disputed SOE subsidization between WTO Members.
Chapter 4 discusses possible WTO amendments as regards subsidy notifications. While the compliance rate with notification obligations has generally been very low for most WTO Members, the main criticism has been directed at China. It has been repeatedly pointed out at the WTO that while China is actively involved in domestic subsidization both at the central and local government level, it still has not completed notification on all of its domestic subsidies. On this matter, primarily two proposals are being discussed: (ⅰ) introduction of “administrative measures” to be applied to WTO Members who failed to comply with their notification obligations, and (ⅱ) utilization of Trade Policy Reviews (TPRs) in monitoring such non-compliance.
In Chapter 5 this study suggests that WTO Members should adopt a “stepped” approach by prioritizing among multiple revision elements. Further it draws policy implications for the Korean government to take into account in future WTO negotiations, with regard to introduction of (ⅰ) new definition of “public bodies” where SOEs are concerned; (ⅱ) additional obligations and rules for SOE subsidization; (ⅲ) explicit benefit pass-through provision for upstream subsidies, (ⅳ) prohibited industrial subsidies leading to overcapacity; (ⅴ) criteria for determining the Non-market-oriented conditions and/or Non-Market Economies (NMEs) under WTO agreements; and (ⅵ) rules to strengthen transparency and enhance Members’ subsidy notifications including administrative measures. Lastly, this study stresses that the Korean government closely monitor the ongoing discussion between US-EU-Japan for a thorough legal and economic analysis on any further developments, and prepare multiple scenarios for all possible outcomes in setting its positioning and negotiation strategies with respect to each revision element.