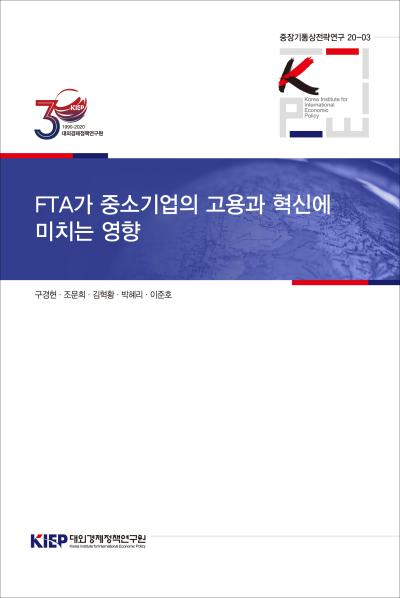 Beginning with the Korea-Chile Free Trade Agreement (FTA) in 2004, Korea has continued to actively implement FTA policies, and as of June 2020 a total of 16 FTAs ​​with 56 countries are in effect. As a result, Korea's trade volume has grown rapidly since the 2000s, providing an important driving force for Korea's economic growth.
A number of studies have reviewed the positive impacts of the FTA policy on the overall economic growth of Korea from various aspects. However, there have been few attempts to explore whether the positive results of FTAs have been shared evenly between large and small/ medium enterprises, or if most of the benefits have been enjoyed mainly by large enterprises. Addressing this research gap, this study examines the effects of Korea's FTA policies on employment and innovation activities of SMEs and analyzes how each effect varies depending on firm characteristics to draw policy implications.
According to the empirical results, the employment and real wages of SMEs significantly increased mainly in industries where the effect of export expansion due to FTAs was higher, with innovation activities also taking place more actively in such industries. On the other hand, although the SMEs in industries with high import competition due to FTAs showed a relatively low increase in the real wage, no negative effect was found on the employment or innovation activities of SMEs. Taken together, Korea's FTA policies seem to have played a positive role in boosting overall employment and innovation of SMEs in the manufacturing sector.
However, when re-identifying the FTA effects by firm size of SMEs, most of the positive effects of FTAs ​​were mainly centered on medium- sized enterprises, and relatively small enterprises tended to be alienated from such positive effects or conversely exposed to the negative effects of FTAs. For example, the effect of reducing the real wage growth rate due to FTA-induced import competition effect mainly occurred in small enterprises, and the effect of FTAs toward increasing the innovation activities of small enterprises was not found. On the other hand, medium-sized firms led the increase in employment and innovation activities of SMEs due to the FTA export effect, and although they experienced a decrease in employment due to the FTA import competition effect, there was no significant decrease in real wages. This suggests that unlike small-sized firms, medium-sized ones have leveraged the import competition pressure from FTAs as an opportunity for efficient resource allocation and productivity improvement through restructuring.
Based on the results of the empirical analysis above, we discuss some policy implications for improving FTAs’ benefits for SMEs’ employment and innovation.