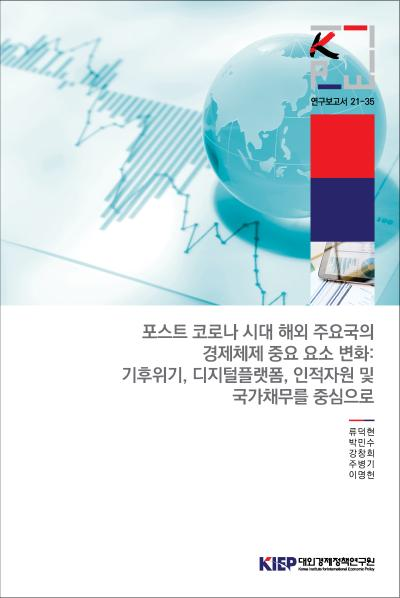 This study reviewed what kind of institutional improvements are needed in the following four areas amid the changes in economic conditions that are accelerating due to the COVID-19 crisis.
First, theoretical analysis was carreid out to reflect the principle of equal rights and historical responsibility in the allocation of obligations between countries to reduce greenhouse gas emissions, which is likely to become a fundamental constraint on future economic activities. Specifically, four apporached were reviewed and compared with the Kyoto Protocol: equal distribution per capita (EPC), historical equal distribution per capita (HEPC), proportional distribution (EPE), and proportional distribution (HEPE) per capita. As a result, a large gap between Kyoto Protocol and the HEPC principle, which is satisfies the principle of minimum equality (‘if historical and BAU responsibilities are the same, everyone should be guaranteed equal rights to common resources regardless of their country of origin’) and historical responsibility (‘standard that all countries are free from historical responsibility’). Existing international agreements such as the Kyoto Protocol were found to be most similar to the EPE, which respects vested interests and does not consider historical responsibility. Korea, which achieved rapid growth in a short period of time, has a very low historical responsibility compared to other advanced countries. Therefore, it is between the position of a developing country that demands historical responsibility and the position of a developed country that demands vested interests, and there is an advantage of being able to adopt a flexible strategy between the two sides in the climate agreement.
Second, we reviewed how to establish competition rules in the field of online platforms, whose importance in economic activities has dramatically increased during the COVID-19 crisis. It was concluded that ex post regulation on a case-by-case is desirable considering and that ex-ante and non-discriminatory regulation can hinder competition and innovation activities. Online platforms have the characteristics of a multi-faceted market that can lead to a winner-takes-it-all market, but in reality there are factors that can offset such a tendency. In order to effectively implement such regulations on a case-by-case basis, it is necessary to revise the review guidelines reflecting the characteristics of the online platform and to upgrade the economic analysis method. To this end, it is necessary to actively refer to the economic analysis methodologies developed for online platforms, in particular, academic studies and judgment cases on market definition methods, and the price increase pressure analysis method, which is measures competition restrictions in business combinations. In addition, measures such as disclosure of data for pre-monitoring or shifting the burden of proof may be considered in order to perform monitoring and regulation more effectively.
Third, taking into account the accelerated spread of new technologies due to Corona 19 crisis, the necessary policy tasks were reviewed to respond to the advancement and fluctuations in skills required in the labor market due to the progress of the 4th industrial revolution. The conclusion of a comparative review of the current system of Korea and major foreign countries is as follows. ① Administrative, financial, and integration of the higher education and lifelong education functions of the Ministry of Education and the vocational training functions of the Ministry of Employment need to be integrated. Also in major foreign countries, government agencies in charge of adult competency development are dispersed among the Ministry of Education, the Ministry of Employment and the local government. However, it is observed that there is a key institution that plays the role of a control tower for adult competency development policies. ② The academic system should become more permeable so that universities can play a key role in the lifelong competency development system. Currently, the university’s undergraduate system is mainly designed for full-time students in their mid-20s. It is necessary to reorganize the university’s academic system so that universities can expand from educational institutions for full-time students in their 20s to lifelong educational institutions that cover the needs of adults for lifelong ability development. ③ A personal learning account system that financially supports people’s lifelong ability development should be introduced. Personal support for skill improvement has been focused on low-skilled workers so far, but in the era of the 4th industrial revolution, the need for skill development will expand to middle-skilled workers and above. Therefore, it is necessary to devise a personal learning account that accumulates a certain amount of support for individuals to use for skill development throughout their lifetime. ④ Labor reform that strengthens the upward mobility of the labor market is necessary.
Fourth, an international comparison was made on the ability to bear national debt and its implications were drawn. It is important to check whether the debt is repayable with revenue, that is, the condition that it is sufficiently possible to repay interest through revenue so that it is not necessary to cover it with another debt to pay interest. Considering this, the credit default swap spread (CDS) was selected and analyzed as an indicator of fiscal sustainability. The estimation of regression models to explain CDS as a function of various variables showed that, in addition to the ratio of national debt to GDP, the maturity structure of government bonds, the ratio of short-term government bonds, and the ratio of foreign government bonds were important factors. The result implies that the national debt-to-GDP ratio is one of the important indicators to be considered in fiscal management, but it is not appropriate to overly emphasize the ratio or insist on a specific level of it.