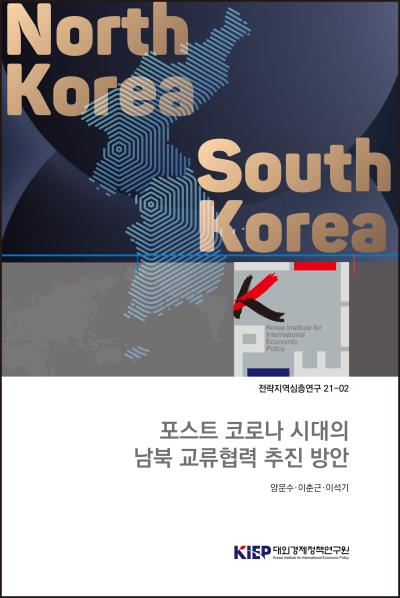 In the post-COVID-19 era, changes in the international political and economic order are likely to be conspicuous. First of all, in the strategic competition between the two great powers, the US and China, the existing conflict has intensified with the outbreak of COVID-19, and some are concerned about the possibility of the emergence of a new Cold War. In addition, border opening, which is the key to globalization, has almost ceased since COVID-19, and as the belief in mutual benefit through border opening and exchanges has collapsed, the flow of globalization will recede, and the nation-first trend is expected to expand. Although the global economy has recovered from the shock of negative growth in 2020 and is recovering to a certain extent in 2021, it is still in a situation of economic uncertainty with the possibility of sluggishness in the manufacturing and service industries along with the contraction of global trade.

In addition, the global value chain (GVC), which was built at the global level beyond borders to pursue cost reduction and efficiency amid the wave of globalization and free trade, is facing a crisis due to COVID-19. In particular, the importance of securing a stable supply chain is growing after experiencing rapid instability in production and supply due to the suspension of production in certain countries and the contraction of global logistics due to COVID-19. Therefore, there is a movement to reorganize GVC in this direction, and furthermore, re-shoring is newly in the spotlight, and this trend is expected to accelerate in the future.

In the case of Korea, due to the prolonged social distancing caused by COVID-19, most economic actors experienced a non-face-to-face relationship between economic activities and socio-cultural relations. Accordingly, digitalization is rapidly spreading in various socio-economic fields. In addition, investment for the digitalization of overall corporate management, such as the expansion of telecommuting, customer management and sales through digital platforms, and the digitalization of R&D, is also expanding. This acceleration of digitization can be a new opportunity factor for the Korean economy, which has strong international competitiveness in the ICT industry.

In the case of North Korea, various non-face-to-face activities have been greatly expanded since COVID-19. In response to the global pandemic crisis, North Korea has implemented an extreme border blockade policy and strongly controls the movement of residents between regions in the country, but on the other hand, it greatly expands non-face-to-face activities by utilizing the information and communication networks it has built in the past. have. These activities are linked to the knowledge-based society emphasized by Chairman Kim Jong-un, so it is expected to continue even after the pandemic subsides. Notable movements include △expansion of supply of various personal terminals, △expansion of factory automation and unmanned facilities, △expansion of e-commerce, △rapid expansion of distance education, and △expansion of telemedicine. The biggest change among these is the increase in video conferencing. In the past, it was partially used in education, but it has been greatly expanded during the pandemic crisis, and even important meetings of party and government organizations are being conducted via video.

What kind of inter-Korean exchanges and cooperation will be promoted in the post-COVID-19 era? First of all, you can think about resuming your existing business. In the case of the Kaesong Industrial Complex, in the post-COVID-19era, the industrial complex’s function and development direction are expected to be re-evaluated. Currently, ideas are being proposed, such as the South-North health and medical cooperation industrial complex that produces materials to respond to infectious disease crisis or COVID-19 vaccines, the eco-friendly technology complex, and the outpost for digital cooperation. In addition, a new cooperative project called the establishment of a digital platform for inter-Korean exchange and cooperation projects will be possible.

Concerns about the digitalization of exchange and cooperation projects are not small in North Korea and South Korea in South Korea, and this may act as a stumbling block for project implementation. It is a great political burden for the North Korean authorities to reveal the gap between the two Koreas in digital capabilities. Therefore, the project itself should be promoted gradually/phased, and the resolution of the information gap between the two Koreas is raised as an important task. In South Korea, concerns that inter-Korean economic cooperation through digital could lead to the expansion of North Korea’s hacking capabilities and hacking means act as a barrier. Therefore, efforts should be made to dispel national and international concerns about inter-Korean cooperation in the digital field, such as the ‘Inter-Korean Agreement on the Peaceful Use of Software Technology’. In addition, in order to utilize inter-Korean economic cooperation in the GVC reorganization process, production and supply through inter-Korean economic cooperation projects should be more stable than in other regions when a global infectious disease occurs. At the same time, the issue of amending the inter-Korean exchange and cooperation laws to regulate and promote economic activities with North Korea through the framework of the legal system regarding the process and results of the activities is strongly raised. Lastly, since the necessity and importance of multilateral cooperation is expected to increase in the post-COVID-19 era, it is necessary to actively seek multilateral cooperation with governments of major countries, international NGOs, and international organizations.