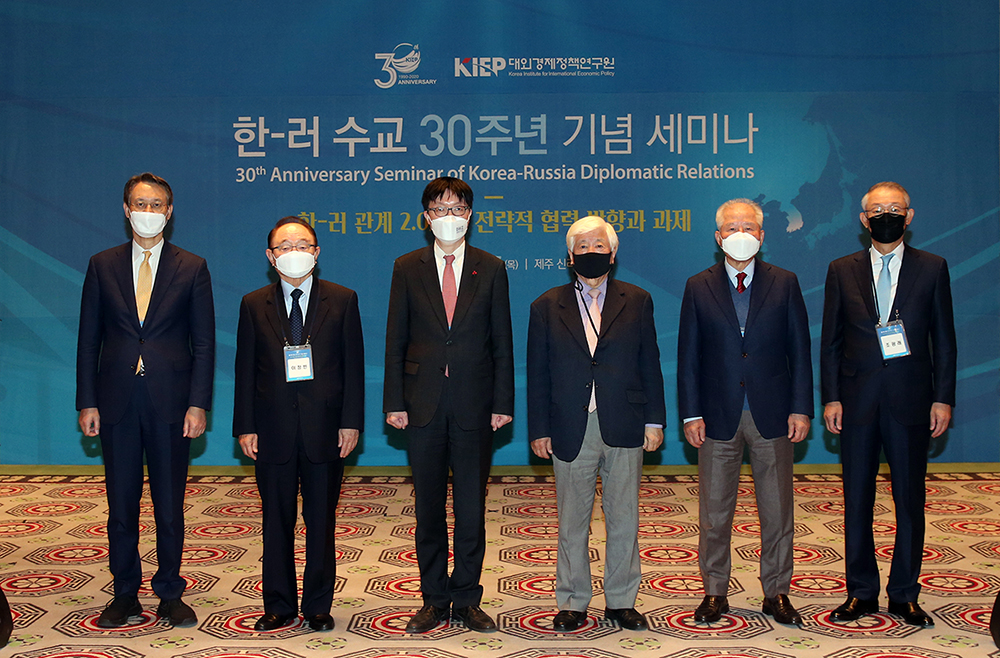 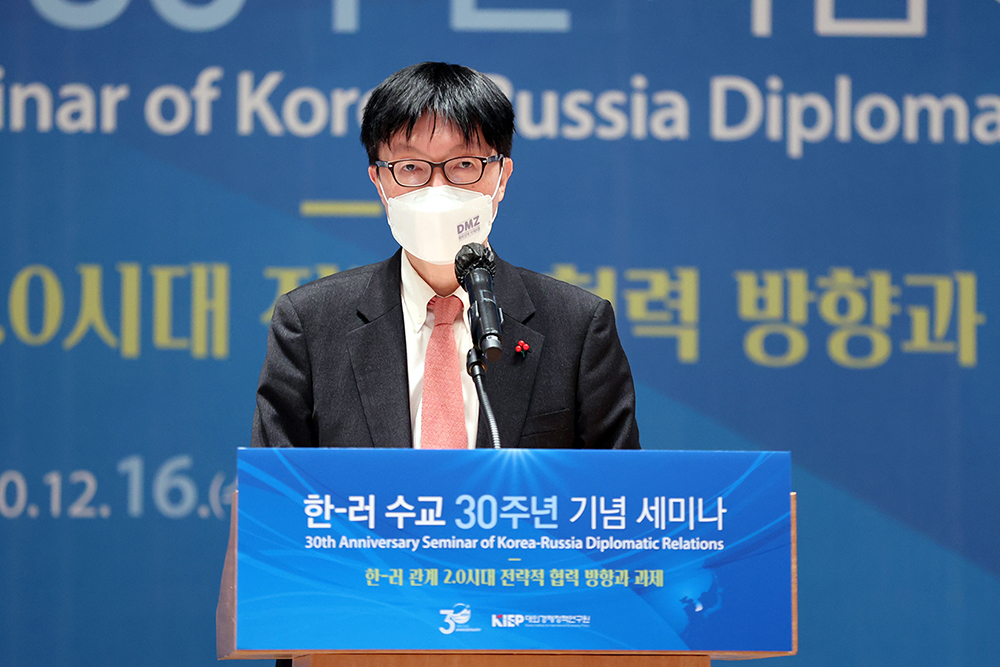 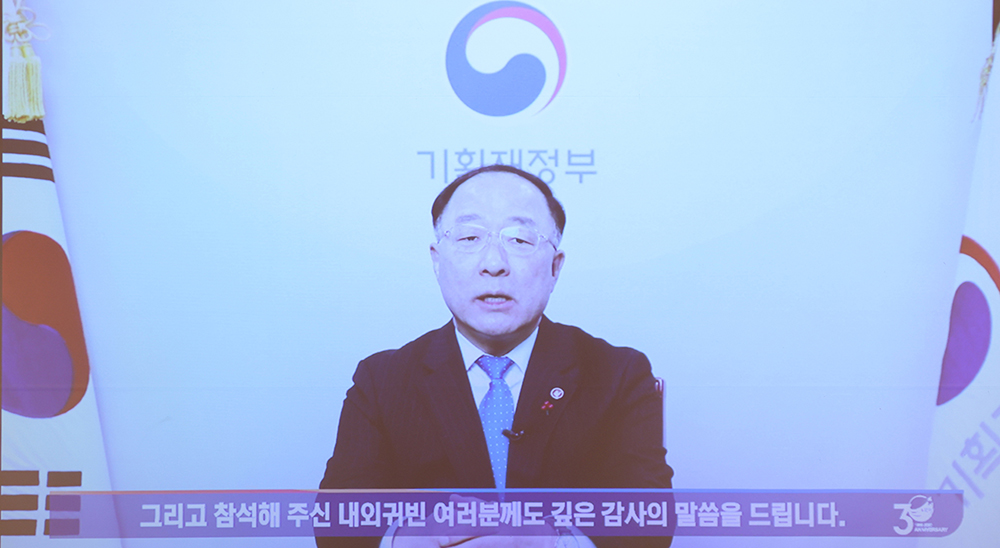 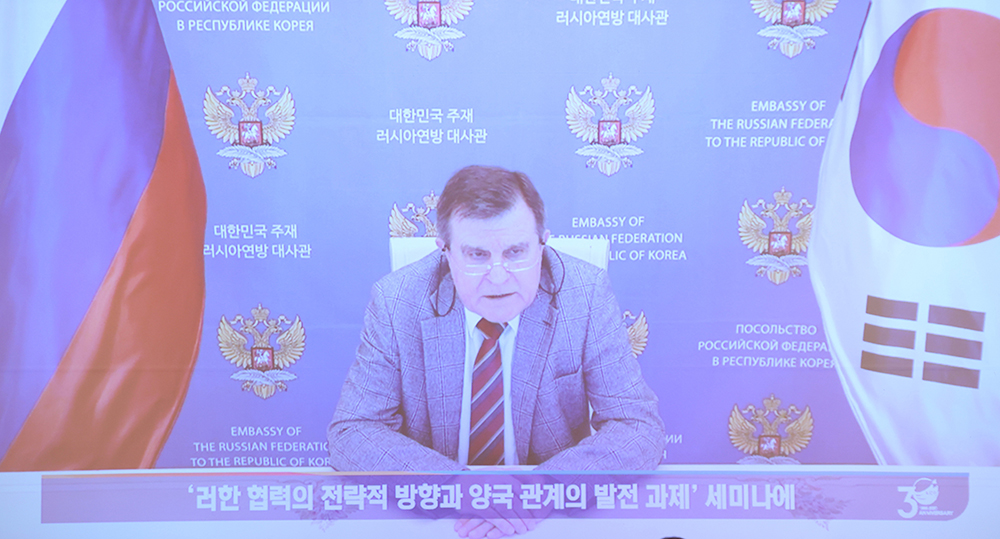 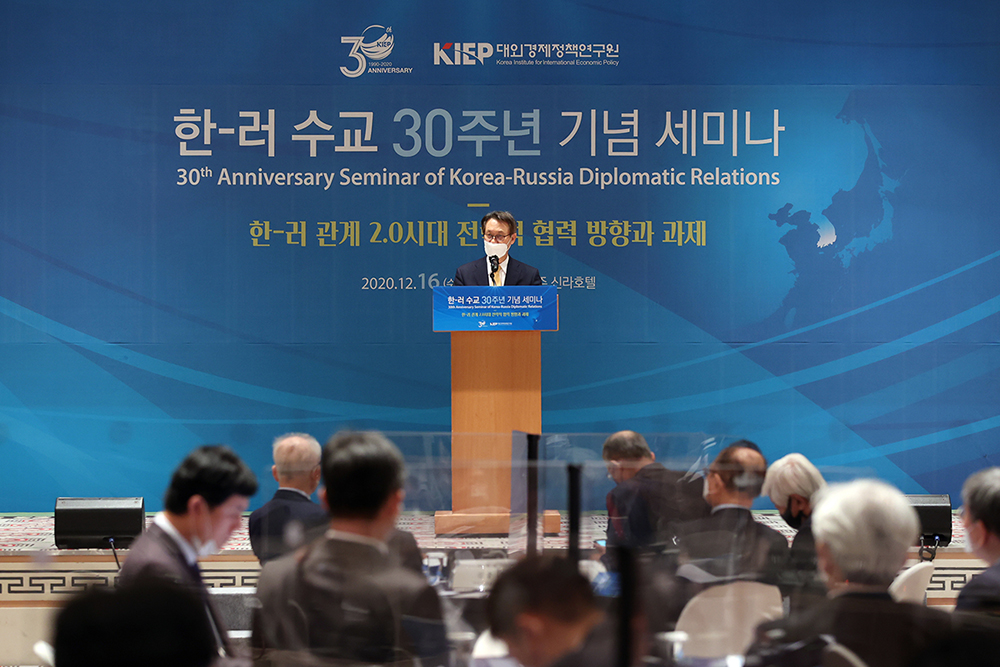 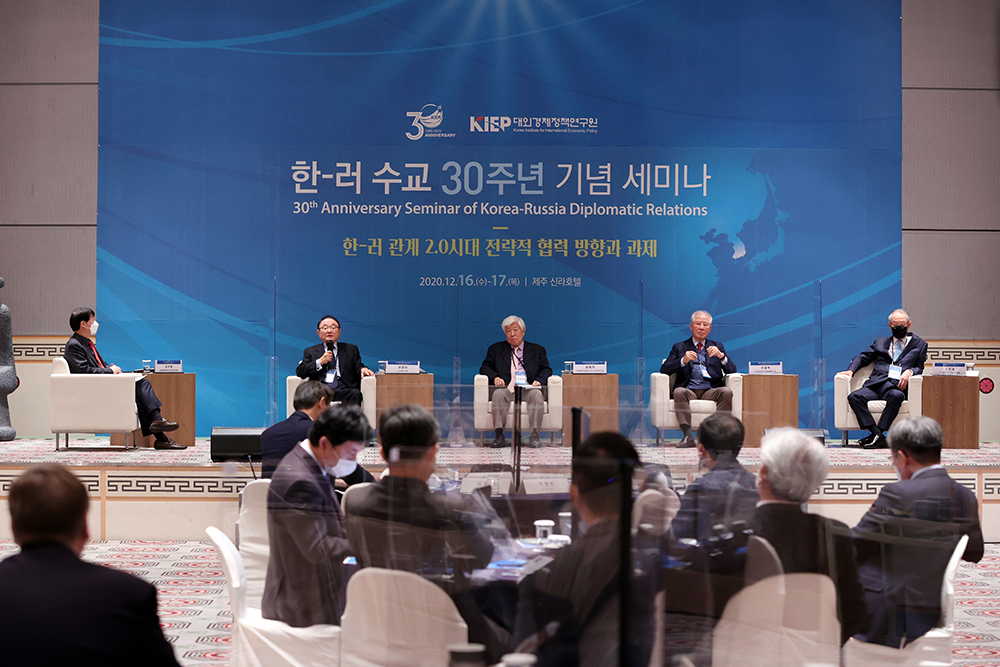 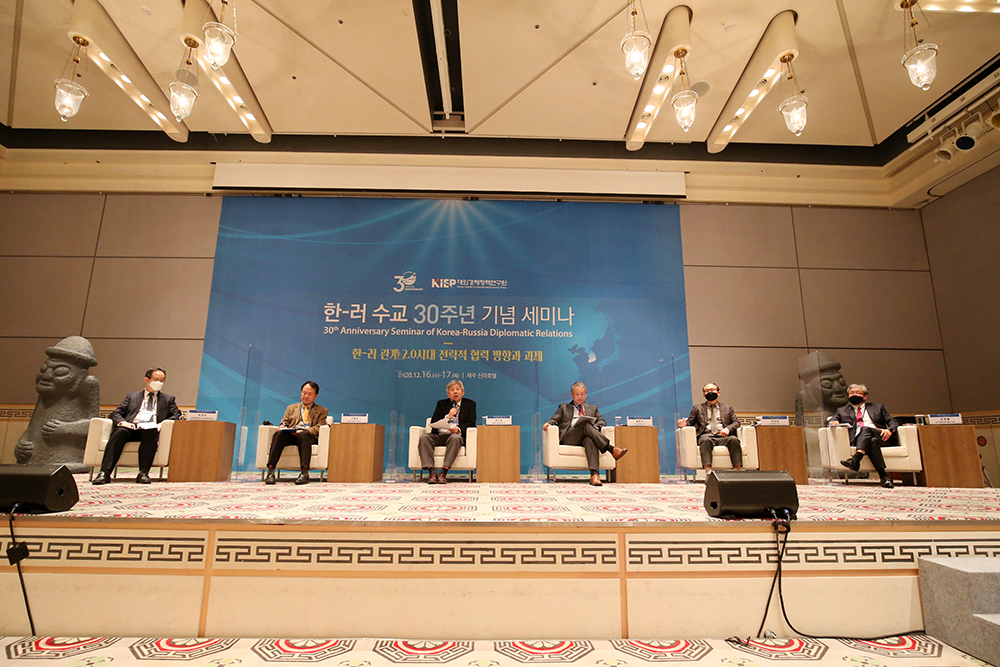 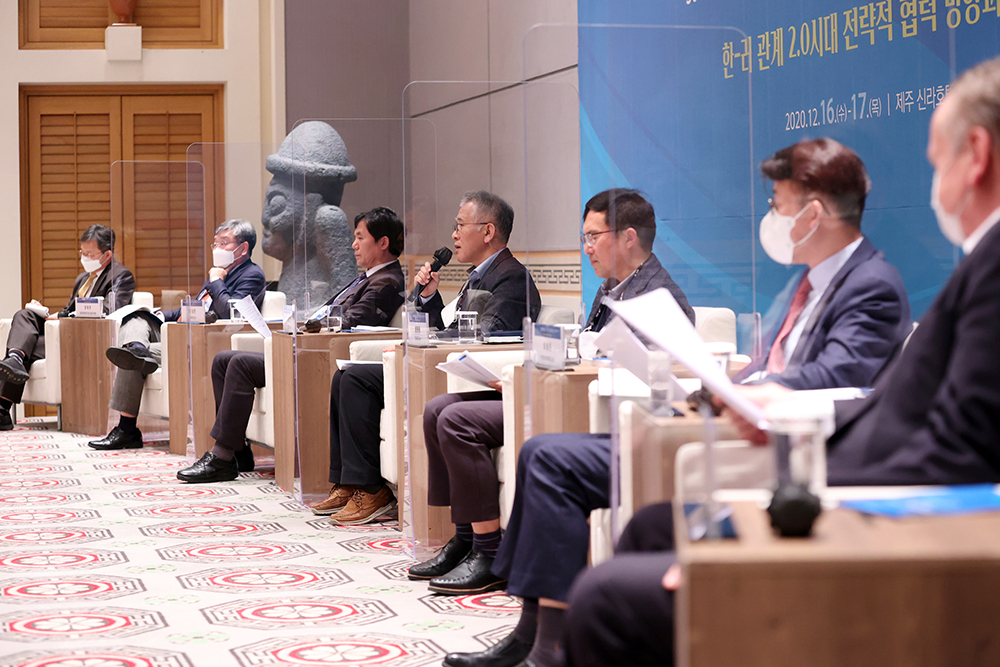 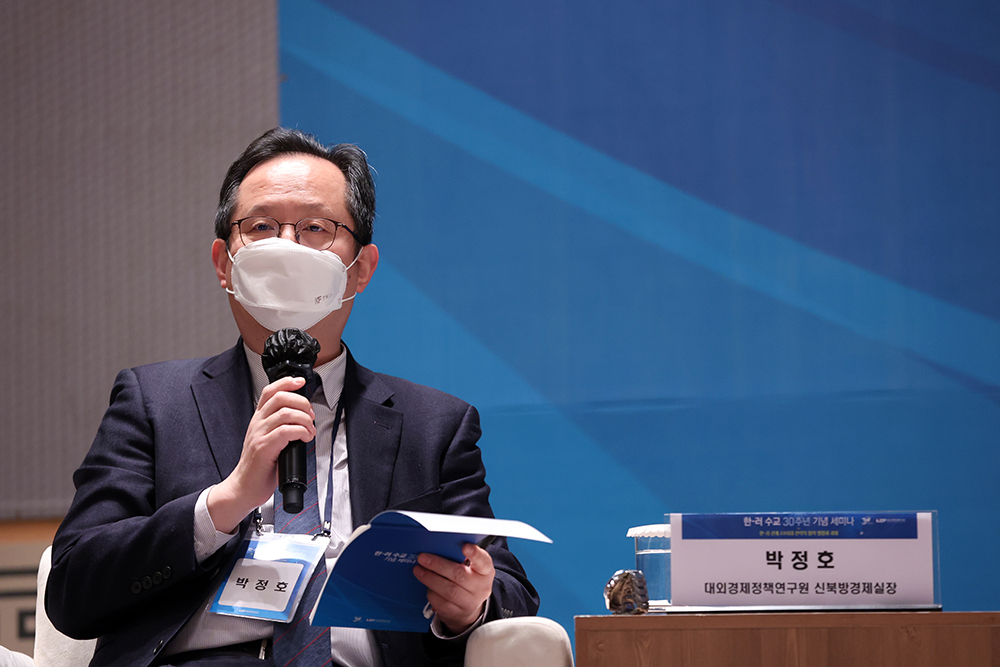 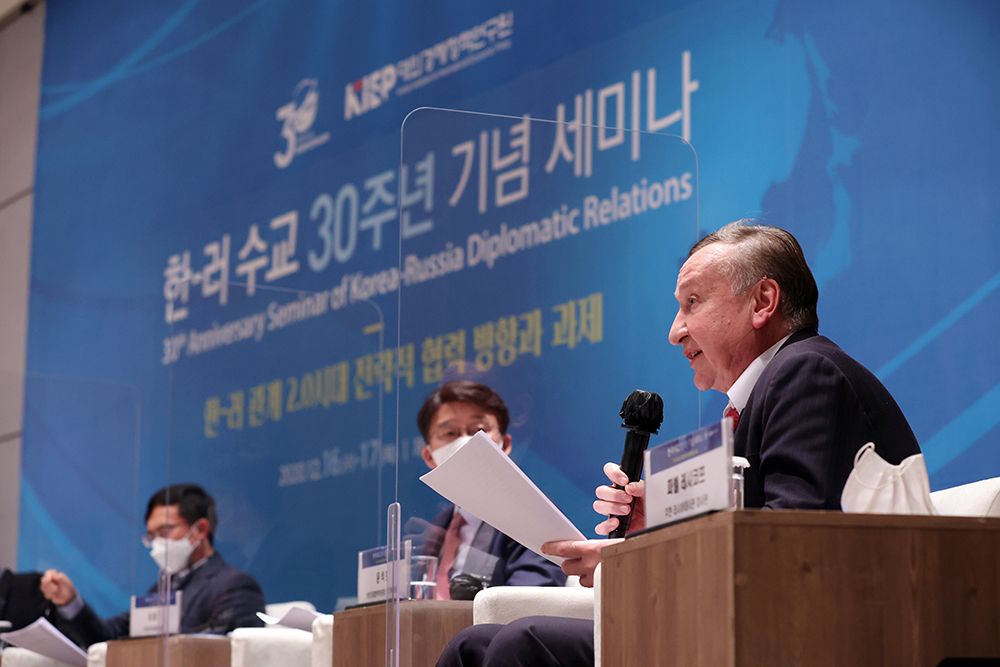 The Korea Institute for International Economic Policy (KIEP) held a seminar in commemoration of the 30th anniversary of diplomatic relations between Korea and Russia, at the Shilla Hotel in Jeju, from December 16th (Wed) to 17th (Thursday). Organized by KIEP and sponsored by the Ministry of Economy and Finance, the Presidential Committee on Northern Economic Cooperation, and the Ministry of Trade, Industry and Energy, this seminar was convened to examine the cooperative relationship between Korea and Russia, marking the 30th anniversary of diplomatic relations between the two nations, and to seek a vision for mutual cooperation.

In the opening remarks, Kim Heungchong, President of KIEP, evaluated that Korea and Russia have made various achievements over the past 30 years, including expanding trade and investment, strengthening corporate competitiveness, and increasing human exchange. For the strengthening of future relationships, he also suggested measures to improve the quality of life, in terms of health, medical, environment, and local infrastructure; digital economic transformation (IT and innovation technology); and the formation of a value chain with the Far East, for instance through industries linked to Arctic development.

In his welcoming speech, Hong Nam-ki, Deputy Prime Minister and Minister of Economy and Finance, emphasized the three pillars for future Korea-Russia cooperation projects: strengthening existing economic cooperation foundations in the areas of energy, infrastructure, shipbuilding, and oceans, and expanding development cooperation in the Far East and Arctic regions; cooperation in digital and other innovative sectors to create future growth engines; and the diversification of cooperation channels to upgrade Korea-Russia relations.

Kwon Goohoon, Chairman of the Presidential Committee on Northern Economic Cooperation, referred to Russia as a key partner of the New Northern Policy, and presented the directions to expand cooperation with Russia as: accelerating economic cooperation through the 9-Bridge Action Plan 2.0; exploring cooperative platforms in terms of trade, investment, and finance; discovering complementary and mutually beneficial areas of cooperation; and expanding cooperation in human exchanges.

Lee Su-Hoon, former Chairman of the Presidential Committee on Northeast Cooperation, explained how the previous Northern Policy began in earnest in the post-Cold War era, leading South Korea to expand its economic territory and explore the blue ocean of soft power, but also left behind the challenges of division on the Korean Peninsula and denuclearization of North Korea. Chairman Lee also stated his hopes for the seminar to reflect on the past 30 years of diplomatic relations between Korea and Russia, unfolding in the post-Cold War era.

Song Younggil, Chairman of the Special Committee on Peace and Cooperation in Northeast Asia and member of the National Assembly (Democratic Party), expressed his hopes for the Korea-Russia relationship to continue maturing as a medium for connecting South Korea to the European continent, and as a strategic cooperative partnership crucial in resolving inter-Korean relations.

Economic Advisor to the President Park Bokyeong said that in a rapidly changing global environment, the two countries should seek common denominators between the New Northern Policy of Korea and the New Eastern Policy of Russia, and identify policy directions for future cooperation in the areas of Far East development cooperation, digital cooperation, and South Korea-North Korea-Russia trilateral cooperation.

Alexander Krutikov, Russia's Deputy Minister for Development of the Far East and Arctic, said that the COVID-19 crisis could create new opportunities for cooperation between Korea and Russia, stating his hopes for constructive dialogues to continue.

Andrey B. Kulik, Ambassador of the Russian Federation to the Republic of Korea, shared his hopes to find ideas that can strengthen Korea-Russia relations.