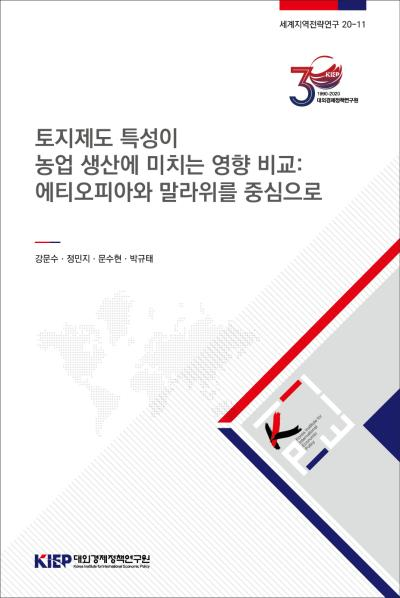 The importance of land in the sub-Saharan Africa is necessary for survival beyond the concept as a simply real estate. However, due to factors such as land institution from colonial experience, instability in political systems, and rapid population growth in rural areas, land ownership in rural areas has a significant impact on agricultural production such as productivity, labor and input investment. Ethiopia and Malawi are commonly known as agricultural countries, and the global donor’s contribution to the agricultural sector is also large. However, land in Ethiopia is controlled by the state and Malawi has a land system that was mixed with British colonial law and traditional common law.
Meanwhile, as the size of international development aid continues to increase, discussions continue on the effectiveness of ODA support in the agricultural sector. However, despite the importance of land tenure system in the sub-Saharan Africa, there is still a lack of discussion on how land ownership can affect the effectiveness of the agricultural ODA. In this study, we investigate on how the effectiveness of agricultural support can be heterogeneous by the difference of land ownership. In particular, to discuss the effectiveness of the ODA in the agricultural sector, we focus on how land ownership and tenure security affect the effectiveness of government support, focusing on agricultural support projects.
Chapter 2 looked at the agricultural policies of Ethiopia and Malawi and the status of aid received from OECD/DAC countries. Both the Ethiopian and Malawi governments operate supporting policies for farmers. Ethiopia is more focused on supporting vulnerable groups for social development, whereas Malawi is more focused on supporting fertilizers and seeds through agricultural policies. However, Ethiopia also has a support policy for maize farmers by providing fertilizer support projects. In the case of ODA in agriculture, the United States and the United Kingdom are the key donors to each country. However for the case of South Korea, the proportion of ODA for agricultural sector is high for the agricultural and rural development in Ethiopia, while the size of the ODA against Malawi is very small.
Chapter 3 describes the background of the establishment of land tenure system in Ethiopia and Malawi, and their impact on agricultural production and gender issues. Section 1 focuses on the background of each country’s land tenure. The government of Ethiopia nationalized rural lands and redistributed to every people. Ethiopia’s nationalization of land and government-led redistribution policies have led to a sharp decrease in land holdings per capita, and agricultural productivity has declined due to continued reluctant investment by farmers due to instability in land ownership. Malawi, where most of the land is redistributed under common law, local leaders (or chiefs) decides whom to distribute. Accordingly, migrants from other regions often cannot purchase or transfer the land and falls in the poverty. In addition, both the Ethiopian and Malawian governments established land policies that were disadvantageous to women. Both governments put women at a relative disadvantage in the land ownership, such as inheritance, gift, and sale of land. In addition, women’s land tenure security is relatively weak, which also works as a constraint on economic activities.
Chapter 4 analyzes the effects of land ownership on farm activities and productivity of farms supported by the government. We use the World Bank LSMS-ISA panel data and generaged two different land ownership variables: land acquisition type and land transfer rights. According to the analysis, even with the government support, there is a difference in labor input investment and agricultural productivity between groups with different land ownership. In particular, land transfer rights rather than the land acquisition type has more impact on farmers’ decision-making and productivity, which was discussed by Besley (1995). In addition, even though women are in a discriminatory position, ownership of the land itself does not significantly affect the productivity or labor supply decisions among government-supported farms. However, in the case of farms that have not received government support, further research is expected in the future as the difference between female and male household owners is correlated with the tenure security.
Finally, Chapter 5 provides policy implications for the importance of the land tenure security in analyzing the effectiveness of ODA projects in the agricultural sector using the results of Chapter 4. In particular, conducting additional surveys on land ownership, women’s decision-making rights, of project beneficiaries in recipient countries might be needed by conducting surveys to avoid the fall mistaken policies by using the average effectiveness. It can be also emphasized that the importance of understanding the characteristics of developing countries’ systems such as land tenure system and decision-making process.
국문요약
제1장 서론
1. 연구의 배경 및 목적
2. 연구 범위와 구성
3. 선행 연구 검토
4. 연구의 차별성
제2장 농업 정책 및 토지제도
1. 에티오피아
2. 말라위
제3장 농업 원조 수원 현황
1. 개요
2. 에티오피아 농업 ODA 수원 현황
3. 말라위 농업 ODA 수원 현황
4. 시사점
제4장 토지소유권에 따른 농업 생산
1. 토지 소유 및 이용 특성
2. 분석 모형과 자료
3. 분석 결과
4. 소결
제5장 정책적 시사점 및 결론
1. 토지제도에 관한 시사점
2. 농업 분야 사업 효과성 분석을 위한 설문 설계 개선
3. 연구의 한계
부록
부록 1. 국별 통계적 특성과 실증분석 결과
부록 2. 토지소유권 차이에 따른 농지 면적과 생산성 간의 역 관계
참고문헌
Executive Summary